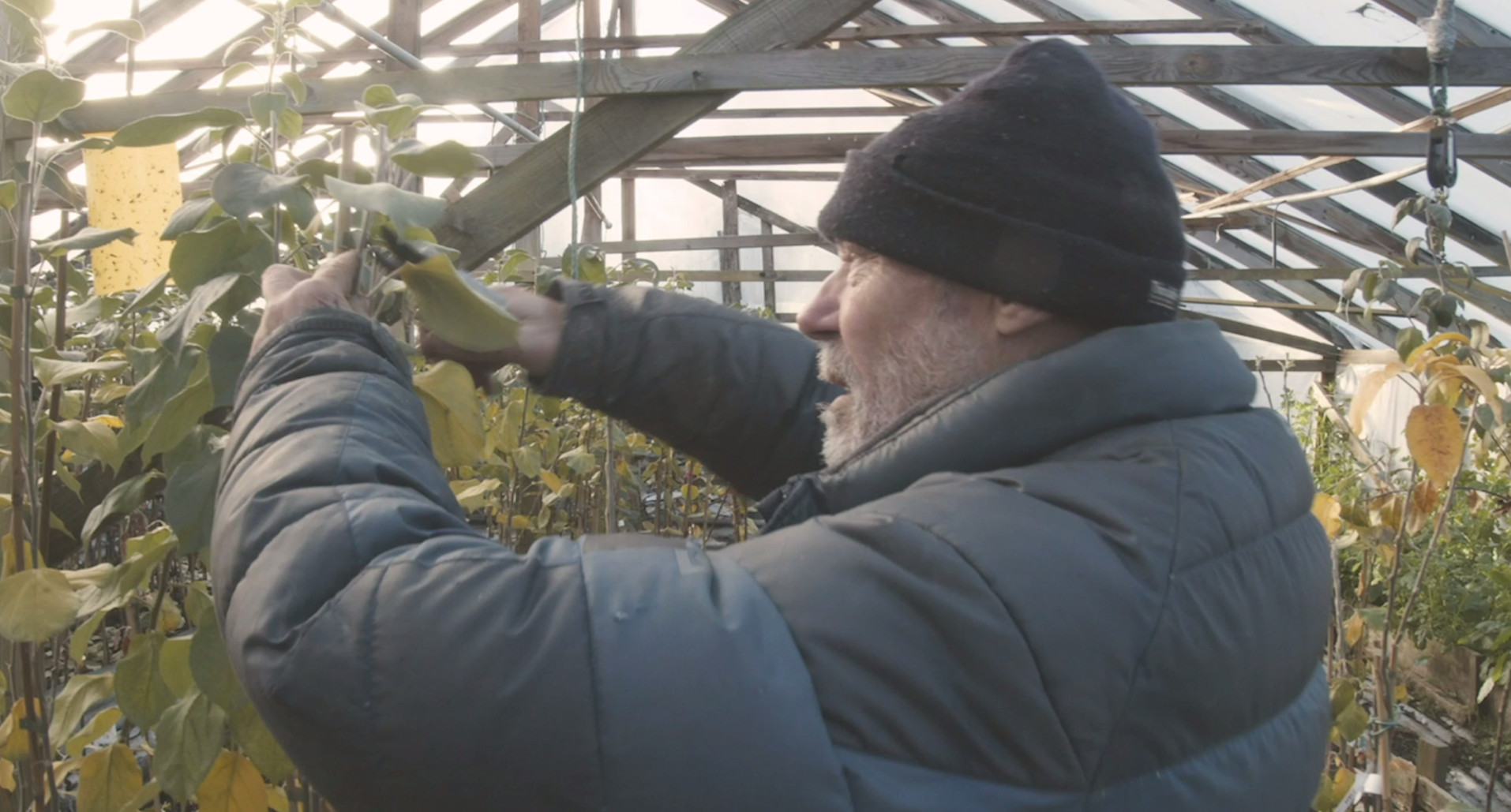 My name is Ian, Ian Sturrock. I’ve lived here so long, it’s hard to remember why I came here! I’ve gradually drifted into growing trees – fruit trees. So I was like Mr Organic in this area, a long time ago, before anyone was interested. And then, since I discovered the Bardsey Island Apple, 15 or 20 years ago, that lead to a resurgence of welsh varieties, and now that’s what I do, that’s my niche.

So all of these trees here, these are all welsh variety fruit trees. Then over here, these are all varieties that are pending… That one over there is from Bala, Lake Bala, that’s just been genetically tested, and it’s unique so I will start making that apple from Lake Bala next year. And then over there are one that a lady found in the middle of the Sand Dunes at Morfa Bychan, Black Rock Sands. People keep bringing them to me and it’s hard to say no, isn’t it?

I spent about 20 years hunting for rare apple trees and never found one! But the Bardsey Island Apple was brought to me by a friend, I realised that it was unique. I then sent it to the National Fruit Collection, where the experts there determined that it was a one off. There was one of them on Bardsey Island, so it’s the rarest tree in the world. And, that story sort of took off, and then it’s led to all this stuff for my sins!

I’m a seasonal business now, I used to, out there, and in that field right down there, and out the back, I used to grow trees for garden centre’s, three year old trees, spent a lot of time making them a nice shape. Now I just send these trees out as one year olds, because I’m essentially, just an online business now.

There’s obvious benefits in Horticultural Wales, it’s good to have their expertise on your side. Because, you meet people, obviously it’s a problem that they live in disparate parts of Wales. I’ve had a lot of help from Aberystwyth University, which of course, if you look at the map it’s close by, but it’s still several hours to get there. But because of Horticultural Wales I’ve established a strong link, with the genetics department there and all those trees behind me now, they’re all ones that are being genetically tested, DNA profiled in Aberystwyth University and I’m now starting to make them.

It’s good to have, to get these contacts, that, some of which I’ve got through Horticultural Wales, because I’m a niche grower. I’m only really going to sell my trees in Wales, because they’re Welsh trees and they do well in the Welsh environment. And it’s good for me too, even if it’s not other fruit growers in the area, go to other Welsh growers because, for example – compost is compost! I don’t know anything about it, I’m just a simple Marine Biologist, what do I know about compost? What do I know about diseases? What do I know about, where do I buy my labels? I don’t know? What do I know about irrigation? They’re not things that are specific to fruit growing, they’re things that are much more general. So, if, with Horticultural Wales, you can get those connections, to meet other, because Horticulture is Horticulture.  The stuff that comes out of your growing media is, that’s a unique bit, but the rest of it, the structures, the compost, the labelling, help with your selling online, computer stuff and everything else.

I’m a bit old and can’t be bothered to do Social Media. I really hate it, but luckily for me, they have been doing that on my behalf if you like. So I don’t have to try and pressurise my lazy sons to get on social media, get off of tinder and get on other forms of social media and do something more useful. It’s all stuff that you only really get to know, when, just sitting around talking.

I’m a member of the Wales Heritage Orchard cluster, so that’s people that are interested in old, old, almost extinct, rare Welsh trees. And we will share our knowledge.

What’s this thing here? Perthyre – that’s a Welsh cider tree. No-one knows anything about it, so if you have other people in your clusters then you can increase knowledge. I will learn so how it does around here, but Wales is a big country!

Often people ask, they want to get feedback, they want to tick boxes. But the trouble is, when you’re in the real world, we don’t have boxes to tick! Obviously, all the help we get, all the contacts we make, help, but it’s all long term. We work long term, these trees grow long term, the projects are short term and that’s a real conflict there. The projects running should be as long as the trees grow basically! That’s how we get real knowledge.  That’s how we, that’s how we get benefit.

And also, of course, I’m a grower, I’m not a business man.  So, I don’t want to spend my evenings sat up there, looking at my statistics. They’re absolutely meaningless. The graphs go up and down! I want to grow stuff, I don’t really want to be able to tick someone’s boxes and say ‘today, I sold 2 trees because of Horticultural Wales’.