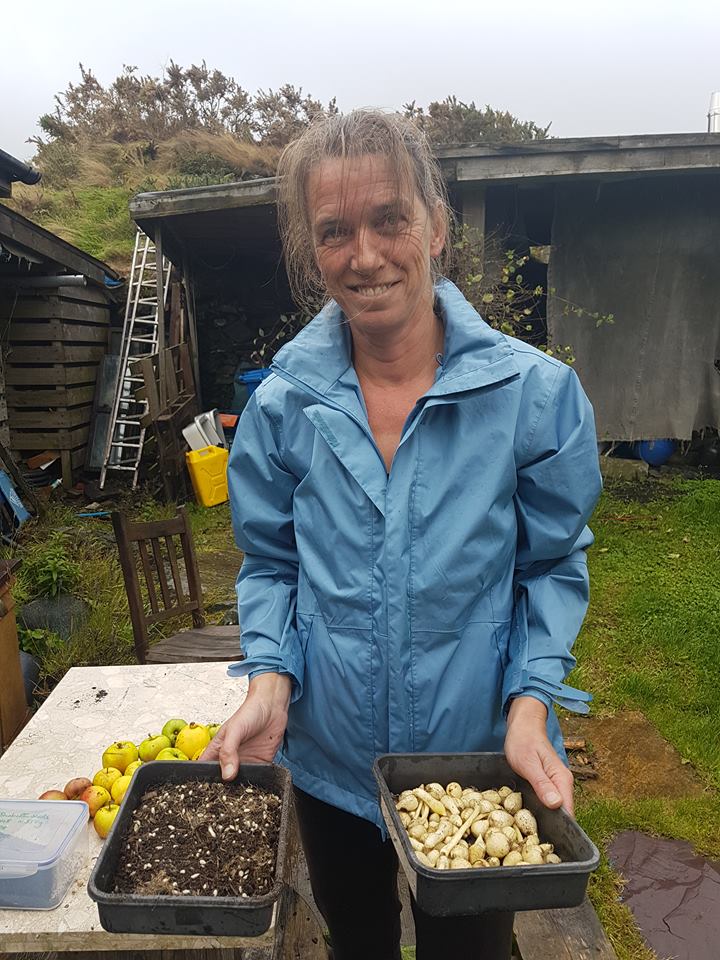 Vera Fitzsimmons-Thoss is a lecturer in sustainable chemistry at Bangor University. Vera runs her business, Vera Bluebell, in Llanberis where she lives with her husband, Jason, and daughter, Hannah.

By accident, Vera started her company when she was growing the plant on her land for scientific analysis, but once the word spread that Vera grew the plant, she had people approach her wanting to buy bulbs.

“I’m a scientist. I wanted to look into the chemistry of bluebells. But once I had a licence, people were asking me for bulbs, and that’s how I started.

“Bluebells have an interesting chemical composition. For instance, in the 13th century, the Physicians of Myddfai included bluebells in a treatment against leprosy. Drug discovery continues to look at what plants could be used to treat diseases, and recently, Welsh honey that was active against MRSA was obtained in part from bluebells.

“We are already researching the uses of bluebells and have found a saponin that is active as a treatment for parasitic worms. I’m doing that in collaboration with a colleague of mine.

“Some Welsh honey, like Manuka Honey, is known to have anti-bacterial properties. It is used in alternative medicine. There are lots of opportunities to develop.”

Vera believes Wales, and particularly the Snowdonia Mountains, is the ideal location to grow bluebells commercially because harvesting the plants at higher elevations produces a resilient crop. Many of the bluebells sold in the UK come from the Netherlands. Vera says many plants grown in mainland Europe aren’t as tough, and so she believes the bluebells grown at her home, on the side of a mountain, are more robust.

“It would also be good to have a certification so that people know a product has been grown in North Wales,” she said.

“At the moment, most of the bluebells come from the Netherlands, but it’s better for the plant to flourish if the plant comes from a similar climate. Our bluebells are from an elevation of 250 metres above sea level; they’re hardier plants. They have four metres of rain a year. I’m hoping sales will improve. The sustainability is there. It would be interesting to identify more pure existing populations.”

Vera supports Horticulture Wales’ plans to develop clusters of horticulture businesses across the country so businesses can help each other. She also believes growing native plants here will help stop the spread of botanical diseases.

“Rather than use Dutch Plants, we could develop a British market. I think the idea of establishing clusters would really help. We’ve recently realised that, due to issues of biosecurity, it would be advantageous to produce more plants in Wales, using Welsh stock—Welsh seeds.”

“I’m excited about the prospect of finding like-minded people. If you have a shared interest, it’s beneficial, and, it would, of course, be good if it was profitable.

“We’ve learnt a lot about the ecology of bluebells; the plant is difficult to establish. But we’ve improved our harvesting. In the future, I would like to develop other populations where the plant is wild and pure and maybe work on a consultation basis.

“It’s very easy to destroy a population but very difficult to establish a new population.”

Vera added, “I’d like to paint the mountains blue. Bluebells are a tourist attraction. They’re probably the only plant that you hear about in the news.”